8-18-22 – I have been so busy that I haven’t had time to post that I got two new chinchillas to be ambassadors for my program. I was told they were friendly. Haha. Where do I start? I drove 3 hours one way to pick them up from a guy who had more than the two. When I first contacted him, Coco had just passed away. He didn’t tell me how many he had but said there were male and females with ages from 4 months to 3 years old. The colors were beige, regular grey and black. I decided to wait to give myself time to grieve and decide which Saturday I would have time to pick one up. I did a lot of thinking and contacted others that had a chinchilla to rehome. One did not like to be held. I was told that the species didn’t like it. Ha! I had two chinchillas ever and both loved to be held. I decided that perhaps I should get two chins to keep each other company. When I was ready I contacted the gentleman again and he had two left and both were bonded. He said they were siblings. As for age, one was almost a year and the other about 1.5 years old. They were siblings? Both are standard grey. On July 9, he loaded them into my carrier and when I got down the road to a pitstop, I pulled the little one out. She was very squirmy and her fur was greasy which meant that she had not dust-bathed. I named them Ruby and Pearl as suggested by my good friend Christine. Ruby is the baby who had mats in her fur on her backside. Pearl’s fur was greasy but no mats. Ruby doesn’t know how to dust bathe but Pearl jumps right in. Both DO NOT like to be held and Ruby is a nipper. Yes, she bites. Pearl will lunge at me and try to bite me when I reach in. It takes a lot of logistics to fetch them. I’m thinking dropping a towel over and scooping them up will be the easiest. Sometimes Ruby will constantly squirm and nip when I hold her. Pearl is a little better about being held. Both will happily take a cranraisin (dried cranberry) from my fingers. I try to hold them daily and talk to them every time I walk by their cage. Neither are litter-trained and will pee on the shelves. Ugh! I decided that they needed a new cage. The one was 10 years old and the shelving had been chewed on by many. The new one was a little pricey but is perfect for them. I have seen them using the bottom tray as a litter pan on occasion. I mean, chins will poop everywhere and that’s fine. Their urine is strong and it needs to always be in the bottom tray and not on the shelving. Sooner or later, hopefully we’ll get there. Right after getting them home I took a comb to Ruby’s mat. Underneath the mats were sores. As of now, the fur has been growing back nicely. She also had a sore behind one ear which has healed too. Because Ruby doesn’t know how to roll in a dust house, I got a sugar shaker and will shake the dust over her and fluff her fur. This will keep her soft, fluffy and greaseless. Sometimes afterwards she will roll on the shelf to get the dust off. That’s how she should roll to get the dust on! Anyways, these two are challenging. 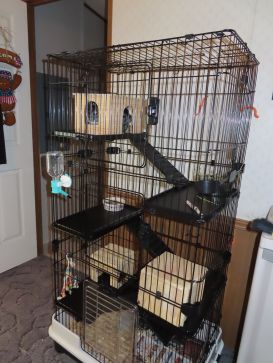